On my last two stopovers in San Francisco when flying back from Las Vegas to Singapore (for work, I swear), I’d never travelled north of the Golden Gate Bridge. They say third time’s the charm, and in January this year, after concluding a gruelling media junket, I finally found some time to visit the areas north of San Francisco on a road trip with a couple of my colleagues.

Early in the morning, with luggage in tow, we dragged ourselves to the nearby Avis office at Post Street to pick up our rental car. I generally don’t like driving SUVs, but with three people’s luggage to transport on the road trip, we needed larger stowage capacity; the consolation was we got a BMW X5 sDrive 35i, equipped with integrated satellite navigation, a panoramic sunroof, and enough boot space for three people’s belongings – albeit with part of the rear seats folded down.

With everyone on board – and everything loaded – we headed for the first stop on our road trip for breakfast: Rose’s Cafe. Having manoeuvred the behemoth into a curb-side parking lot along Union Street, we entered the cafe and got a table by the window. The place seemed like a favourite among the locals, with many supposed Sunday churchgoers dropping in for a meal. The informal atmosphere extended to the service as well, and the place gave off a very casual and local vibe. While my travel companions ordered more conventional breakfast choices, I opted for a picture-perfect plate of linguine with manila clams, fennel, onion, chilli, cream, garlic and white wine, which was presented on a plate with rather English-looking floral motifs, and tasted as delightful as it looked. The addition of cream was an interesting twist to the traditional vongole, but done with enough restraint so that the pasta never threatened to cloy.

Disappointed, we continued on to Hawk Hill. Travel guides aplenty claim that one cannot visit Sausalito and not head out to the Marin Headlands; I’m typically not influenced by such assertions, but they got my attention at the mention of twisty roads and spectacular views. In this regard, Hawk Hill and the winding Conzelman Road delivered on these promises. The roads were smooth and well maintained, and despite the heft of a fully-loaded SUV, surprisingly fun to drive along. 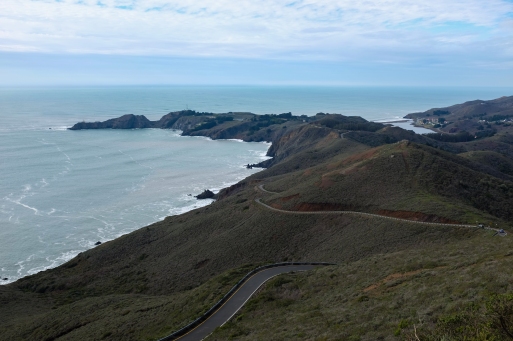 The view of Conzelman Road from Hawk Hill

Me admiring the view

Our next stop was the Point Bonita Lighthouse, situated along Conzelman Road. This is the only lighthouse in America that is reached by crossing a suspension bridge. If you have extreme altophobia, have a good think before pencilling this into your itinerary, as you can see gaps between the planks of the suspension bridge, and it’s a long way down to the rocks and crashing waves… There’s a National Park Service member who counts the number of visitors crossing the bridge (I didn’t ask if it was simply to track visitor numbers or to ensure there aren’t too many people overloading the bridge at any time), and according to the internet, the lighthouse still uses the original French Fresnel lens from 1855. Just note that the public parking lots are a half-mile walk from the suspension bridge, so allocate some walking time in both directions when planning a visit.

After walking back from Point Bonita, we drove into town for lunch at Poggio Trattoria, which serves up northern Italian cuisine with some ingredients apparently sourced from an on-site garden. The complimentary bread and butter here is superb, and we made the rookie mistake of stuffing ourselves with it before our orders arrived at the table. In our defence, the kitchen did seem to take their time with our orders, so what were we supposed to do?

Risotto with hedgehog mushrooms (US$11)

Brussels sprouts with pancetta and sage (US$9)

I like a good side of roasted brussels sprouts, especially when prepared with bacon or pancetta, and Poggio’s didn’t disappoint. The risotto was also fragrant and delicious, although I feel the rice could have benefited from a little more time on the stove.

It was late in the afternoon by the time we were finished with lunch. With our stomachs full, we drove through more scenic switchbacks before arriving at the Muir Beach Overlook. By this time, the clouds had emerge and shielded the sun, which meant dipping temperatures and shivering visitors (just the three of us, really). 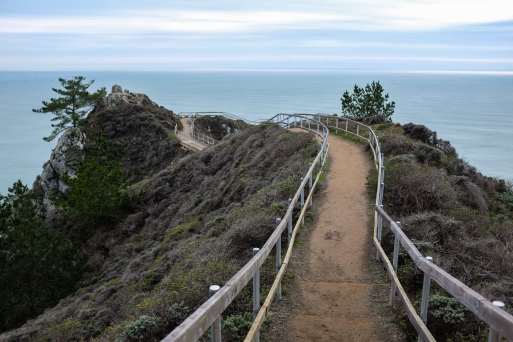 The view from the Muir Beach Overlook 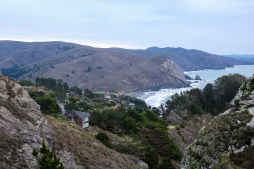 A house on a hill

We got back into the car when the sky began to darken, and drove to Holiday Inn Express Mill Valley, which was to be our hotel for the next two nights of this part of the road trip. Given the late lunch we had, we didn’t exactly have the best appetite for dinner but we persisted anyway, so that everyone could have an earlier night’s rest afterward. Fortunately for us, the food at dinner was unforgettable. You’ll want to read about our meal at Fish Restaurant to find out why.

The next morning, I chose sleep over the modest complimentary breakfast offered by Holiday Inn. I did grab a cup of joe just before we drove out to see the famous floating homes along the Richardson Bay Marina. The common boardwalks that lead from the car park to the floating homes is open to the public in the day, but visitors are reminded to check their noise levels when they view the homes. Needless to say, it’s a fairly quiet community but many residents we encountered would nevertheless greet us with a smile, despite probably having already seen countless tourists exploring their neighbourhood. Such interest comes with the territory, I suppose. 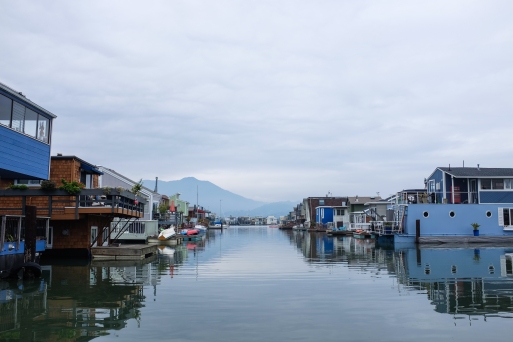 A pirate’s home, or so it reads 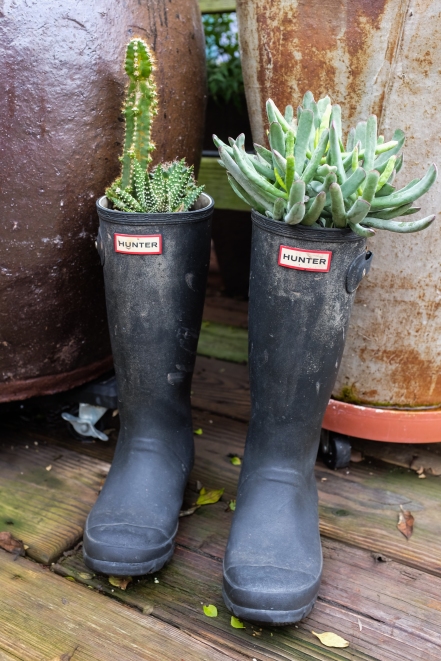 I want to believe…

Not quite what Google typically shows in its search results

Not everyone gets their mail sent to their doorstep

As romanticised or glamorous as the floating homes are often written to be, not all of them are equally well maintained. Some seem to be rather neglected, and provided a stark contrast to their supposedly more affluent neighbours just a pier or two away. We spotted a couple of sea lions in the water close to the car park, and although there were no visible trash discarded in the water, we could clearly see a layer of grease on its surface – not quite the idyllic and immaculate image that Hollywood and travel literature often paints, then.

With one of the key landmarks ticked off our to-visit list, we drove the short distance to Seafood Peddler for lunch. My order of littleneck clams was steamed in garlic, butter, olive oil and Pinot Grigio; topped with slices of toast buttered, it could do no wrong. My entrée of cioppino with capellini included Dungeness crab meat, chunks of cod, prawns, scallops, more littleneck clams (I could enjoy this all day), and mediterranean mussels. Everything about the dish was incredible, and it took a lot of restraint not to lick the plate clean of the stew. Prices are clearly on the higher side, but with a view of the yacht harbour across the street and food that tastes this good, I feel it’s reasonable.

San Francisco-style cioppino with capellini (US$32.99)

After lunch, we crossed the street to get coffee from Philz before returning to the car and making the hour-long journey to the Point Reyes Lighthouse, one of the highlights of this road trip. Its location near the end of Sir Francis Drake Boulevard, and the view from the top of the staircase leading down to the Point Reyes Headlands, provides a visual reminder of the surrounding waters’ hazardous conditions to sailors in the area. In fact, Point Reyes is reportedly the windiest place on the entire pacific coast. This, along with strong currents and navigational issues in the past, made these headlands the final resting place for many unfortunate vessels.

The wonder of Point Reyes Lighthouse began with the drive from Sausalito, as low-rise buildings shrank in the rear view mirror while we headed in the direction of Inverness, with music from our road trip playlist coming through the Beemer’s brilliant audio system. Sir Francis Drake Boulevard is a long east-west arterial road in Marin County, and became twisty as we drove closer to the coast. The changes in elevation and camber made the drive engaging, although certain irregular sections of the road sent the occasional jolt through the X5’s springs.

We had to stop the car about 10 minutes from the lighthouse’s trailhead and walk the remaining distance. The car park has a pit toilet with no running water, but if you can hold it in, there are real toilets close to the visitor centre about 650 m ahead on foot.

The staircase leading down to Point Reyes Lighthouse 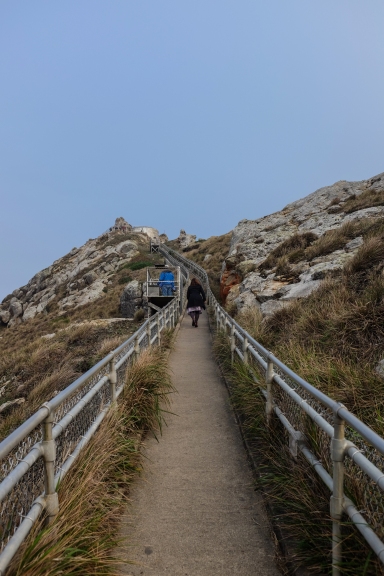 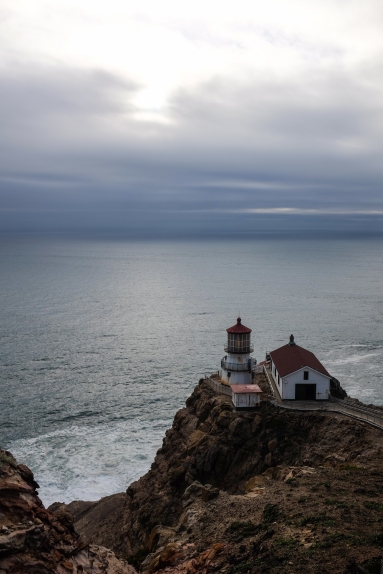 A portrait of calm 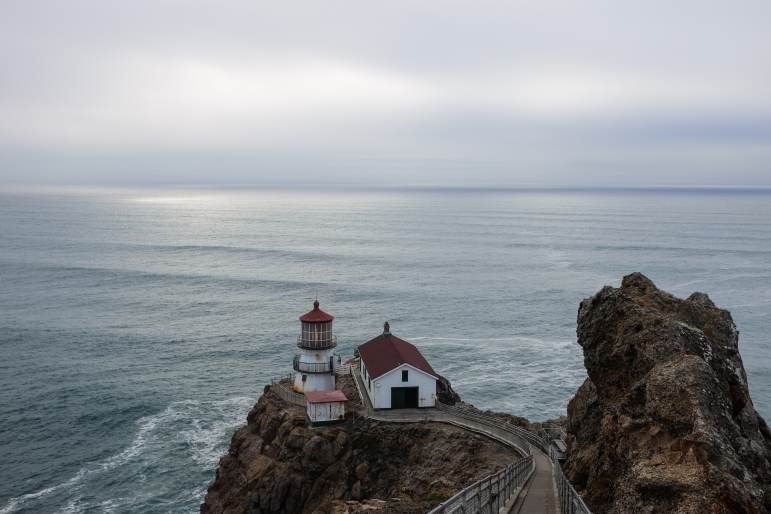 After the short walk, there’s still some distance to go in order to physically reach the lighthouse. The path leads down approximately 30 storeys, as the sign warns, and it’s a mixture of rough slopes and steps. There’s nothing to prove here – take your time climbing down and back up the path, and take as many breaks as you need along the way (there are several stopping points on the side of the path). We were fortunate to have clear weather on the afternoon we visited, and although it was cloudy, there was just enough of the afternoon sun shining through to add a warm tone to the pictures. I’ve seen pictures of heavy fog when others visited, but those conditions create a different atmosphere altogether.

With the stairmaster session completed, we chased the final moments of daylight as we retraced our route along Sir Francis Drake Boulevard toward the cypress tree tunnel that was about 15 km away. We had difficulty locating the unnamed road in the BMW’s navigation system, and with little or no cellular connection at the Point Reyes car park, I threw caution to the wind and gunned the X5 along the winding road while my passengers kept trying to get a signal on their smartphones. Truth be told, the tree tunnel isn’t difficult to spot from a distance, and we arrived with about 15 minutes before the sky began to darken very quickly. Unfortunately, the sun had already dipped below the horizon when we turned in from the main road, and there was no hope of a photographer’s golden hour. The lack of any mist or fog also meant there would be little dramatic effect in photos.

All these factors combined to make the tree tunnel a very underwhelming experience for me.

When night fell, we got back into the car and made our way back to Mill Valley for dinner at Buckeye Roadhouse. The exterior resembles a hunting lodge, and we were led into the restaurant’s grand dining room, decorated with wood-panelled walls and a tall stone fireplace.

The exertions of our visit to Point Reyes gave us a (misguided) sense of entitlement to indulge ourselves over dinner. The onion rings were a crowd pleaser, and my flat iron steak was delicious with the grilled sweet onions layered on top of the beef. The desserts were three plates too many for me, as we were pretty stuffed by then, but my protesting gut was out-voted by my two dinner companions. Not having a sweet tooth myself, I thought they were good, but ultimately not memorable.

Visiting two of California’s famous lighthouses in the same number of days, interspersed with some brilliant food and amazing driving roads, made this a fantastic start to our road trip in the Bay Area. We spent the next two days in the famous Napa Valley – you won’t want to miss the write-ups on that.

2 thoughts on “Two days in Sausalito”

I’ve wanted to try this for a long time!
Pitted for some new rubber from Goodyear today, after the 21,000km wear on my Michelin Pilot Super Sport (swipe left)
Loading Comments...
%d bloggers like this: